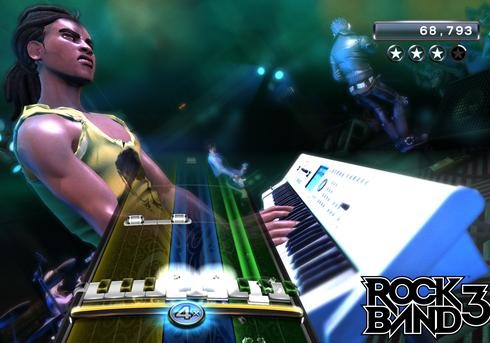 Rock Band 3, coming this Fall, was revealed at none other than USA Today. Fully functional 25 key keyboard, 80+ songs including The Doors and Bohemian Rhapsody, Pro mode, updated guitars, and a kitchen sink are included in this new sequel.

"In addition to the new keyboard controller, also due for the game's release are two advanced guitar controllers that take advantage of the Pro mode, one a full-sized, fully functional Fender guitar (all sold separately, no prices yet).

Other Rock Band 3 advances: improved animations, refined gameplay features — players can drop in and out of games, or change instruments and difficulty settings without stopping songs — and a easier-to-use song menu.

'Our ambition for Rock Band 3 was really to re-energize and reinvigorate the (music game) category and advance it and move it forward,' Rigopulos says."

I thought I was over with Rock Band, but an actual, albeit small keyboard and Pro mode have me exited. At this point singing, keyboard, and drums almost mimic the real thing, which is great. It's just the guitars now that have the toy feel.

The set list so far from Rock Band 3 (via Ridley327 in the Neogaf Thread):

Thanks goes to the Neogaf Thread for the heads up on this great news.