Following in the footsteps of great historical figures is a great way to learn about them. Michael Wood famously did so in the 1980's for his PBS documentary and book In The Footsteps of Alexander The Great. This March, UK-based marketing director Chris Worth completed a similar endeavor—not by tracing the path of a real-life emperor or explorer, but a humble video game character. One known simply as "The Courier". 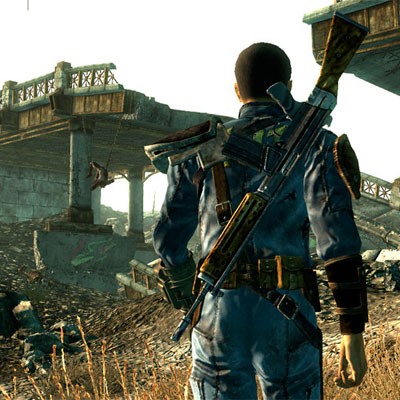 Players of Fallout: New Vegas already know him/her well. The Courier is the player character in the game, which takes place in a post-apocalyptic re-imagining of the Mojave Desert area surrounding Las Vegas. The game's developers have long touted the similarity their virtual Vegas bears to the real area, so Worth decided to test their fidelity and research by visiting 34 real-world equivalents of their in-game locations. Worth photographed and videotaped them, and then compared them side-by-side with meticulously selected screenshots from the game. You can see the results on his website.

Worth's project is a great read, particularly for those interested in game design. His analysis of how the game designers chose to alter the real world to improve their game is insightful and lucid. The photos and screenshots are well-framed and illustrate his points well for the most part. More and more, advances in game technology are allowing designers and artists to recreate the world more accurately—and how they choose to alter the layout and rules of the real world largely determines just how interesting the game is.