Shoot-em-up games, or shmups, consist of lone or small groups of players shooting at and being shot at by hordes of colorful enemies. The genre is thought to have peaked in the mid-'90s, but recent games in the indie world may be saying otherwise. Geometry Wars and other twin-stick games kicked off the trend, but newbies Trouble Witches NEO, Outland and just-released Gatling Gears have brought some much needed originality into the modern shmup scene—making it something worth exploring again.

Gatling Gears is the second game by Dutch developer Vanguard Games. Like their first one, an excellent turn-based strategy game called Greed Corp., Gatling Gears is set in Vanguard's Mistbound world (pictured below), a post-Steampunk fantasy world full of warring factions and dire environmental concerns. Original IP is all but dead in the mainstream games space, making the charming and well-thought-out Mistbound all the more impressive. Vanguard developed their own engine to render this world for both games, and it does so with simple, clean, colorful 3D that animates well. 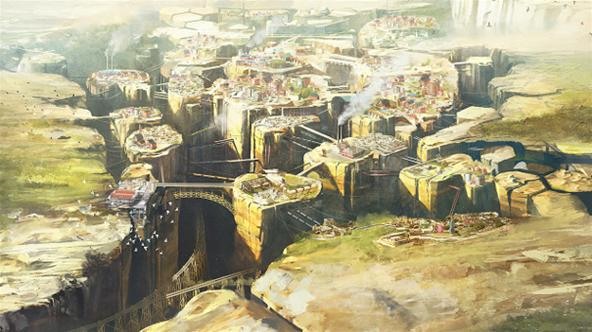 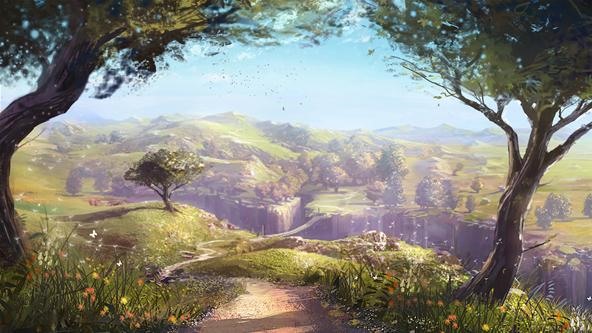 The gameplay is great, especially with a friend. 1-2 players each control Gears, large bipedal tanks also seen in Greed Corp. and inspired by decades of mecha anime. Like in other twin-stick games, the player moves the walker with one thumbstick whilst aiming and firing their main gun with the other. Unlike most twin-sticks, there is a lot more to the game than this. Players also have a cannon, grenade launcher, and electro-death-blaster with limited, recharging ammo. The key to success? Juggling the weapons effectively for different combat situations and dodging enemy fire.

The scoring system adds another interesting gameplay layer. Every enemy drops small gears, which when collected increases the players' score multiplier. This increses the number of points players receive for killing enemies. The more points players receive in a given level, the more XP they will receive at the end for upgrading their character. The multiplier goes back down when players take damage. The whole system instilled in me a powerful urge to perfect each level, replaying them as soon as they were completed to try and get more points.

The levels design is clever and has a lot of variety, as do the large bosses. There are plenty of them too, the campaign mode features six lengthy and distinct worlds to complete in single-player and co-op modes. Co-op is where the game really shines. Pets will go unfed as you and a friend shout at each other over strategy and in celebration over awesome kills, playing level after level, replaying levels for more points, and generally getting the most important thing you can get out of a video game: fun. If you like fun, have $15 and an Xbox Live account (coming soon to PC and PSN), you couldn't do much better than this game.